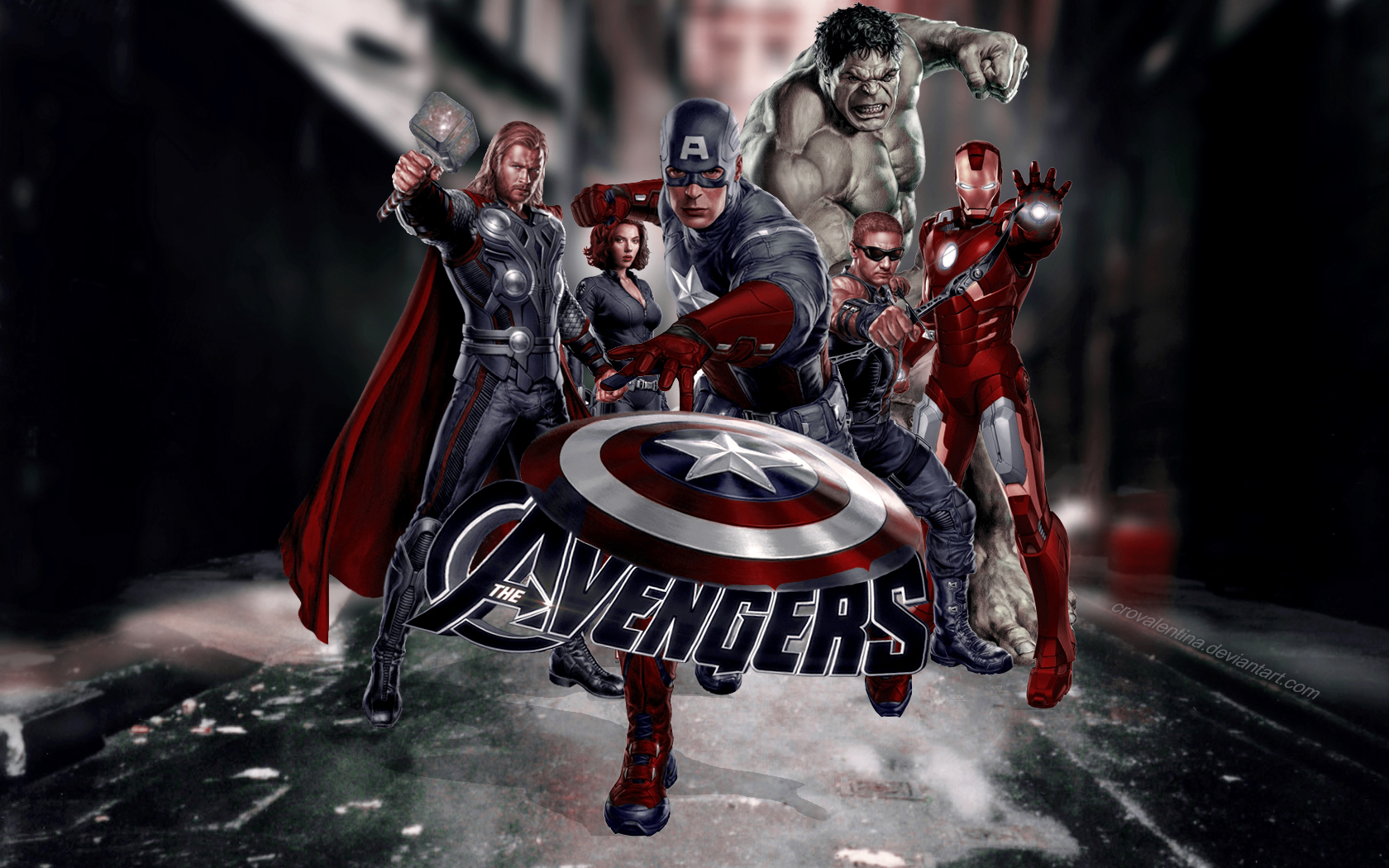 Avengers Slots is an officially licensed Marvel slot machine developed by Playtech. The game is based on the 2012 blockbuster by Marvel Studios, which was directed by Joss Whedon and starred Robert Downey Jr. as Iron Man, Chris Evans as Captain America and Chris Hemsworth as Thor.

The Avengers delivers a rich, fun experience that’s exceptional for a video slots game. It’s one of those slots that’s quite fun playing in arcade mode, and as with all slot games licensed by Marvel, you can play it in its free-to-play mode indefinitely. The story is light and only ties into the movie by a thread, but it works for what it is, and in addition to Captain America, Iron Man and Thor, the game showcases the Hulk, Black Widow, Hawkeye and Nick Fury.

Try out The Avengers slot game right here for free:

>> Visit the William Hill Casino to play The Avengers Slots for real, and get your £150 bonus <<

Avengers Slots is a five-reel, 20-line progressive video slot machine. The Avengers characters and logo make up the core symbol set, and the set also includes the standard poker symbols.

Avengers Slots uses a series of large, easy-to-read buttons organized at the bottom of the screen as its interface. Click the Info button for the pay table. Click Lines to cycle through one to 20 pay lines, and click the plus and minus buttons to adjust the line bet. The Autoplay button starts an auto-play mode that will play indefinitely until you win, hit a feature or stop it. The Spin button initiates the round, and it’ll turn into a Stop button during auto-spins.

The line count is 20 by default. Ideally, you should keep all 20 lines activated, but you can adjust the count if you prefer. Then set the line stake and click either Spin or Autoplay to begin. Since auto-play is a toggle feature, it’s very convenient for all players. The pay table scales well, so minimum bets are a viable option, but bigger bets give you a better shot at the progressive.

Every spin on a Marvel slot game by Playtech contributes to four progressive jackpots: Power, Extra Power, Super Power and Ultimate Power. Hitting a jackpot is random, and your chance of winning each spin is dictated by the overall size of the stake.

The Avengers has a lot of cool bonus features going on. The first is simple enough and called the Avengers Assemble bonus. When all 5 Avengers appear on a payline – Captain America, Thor, Iron Man, Hulk, and Nick Fury, in any order, you win 200x your line bet! 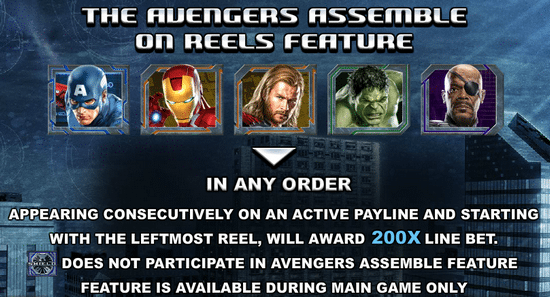 The game’s most prevalent feature is its wild symbol, which can appear anywhere on the reels and dual-serves as a jackpot symbol.

The Avengers scatter symbol will launch the Wall of Heroes, the main bonus game, when three or more of the symbols appear anywhere on the reels. Hitting 3 or more Avengers symbols will open up a new game where you select an Avengers icon to reveal the hero beneath. Match 3 heroes and receive 9 free games! 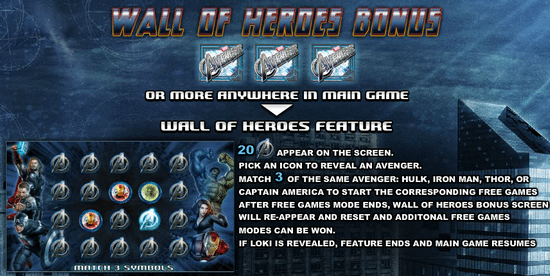 The Wall of Heroes bonus game gives you potentially indefinite chances to match three heroes. Every time you can match 3 heroes, you will receive 9 free spins along with special bonuses specific to that hero. For example, Captain America’s free games will play differently than Hulk’s free games!

Picking Loki on the Wall of Heroes will end the bonus round and return you back to the main game. 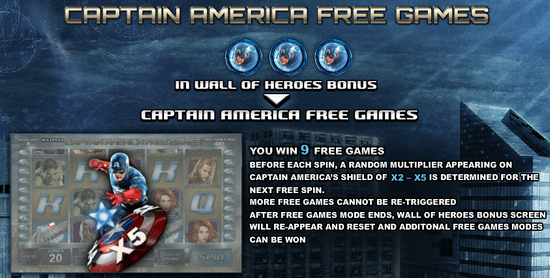 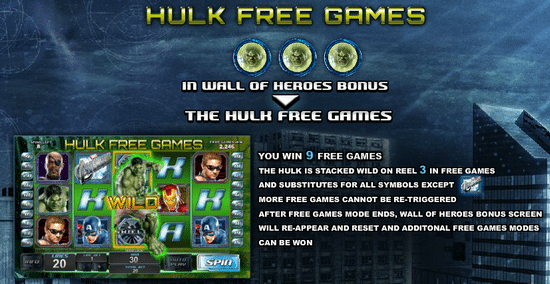 The graphics, on-the-reels animations and video are all top notch, It seems that with these Marvel licensed slot machines, the developers get to take advantage of Marvel’s resources. It was an excellent design decision to build the game with new art rather than lift images directly from the movie because it allows the game to feel connected but still very much its own creation.

The Avengers Slots has a very epic-sounding soundtrack, but the main song is rather short and overstays its welcome if you play for a long period. Fortunately, disabling the music is simple. The sound effects are all outstanding, and the game really throws a lot at you in that regard, which definitely adds to the richness of the experience. The computerized voice, however, falls a bit short of Jarvis, and this is one aspect where you wish that they had just lifted sound bites from the movie.

We recommend playing the Avengers slot game for real or play money at the William Hill Casino!