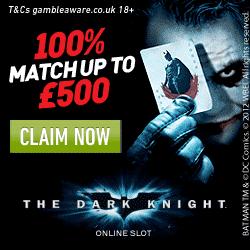 The Dark Knight, which was directed by Christopher Nolan and stars Christian Bale as Batman, is one of the most successful movies of all time. In 2008, The Dark Knight slot experience was launched alongside the movie, and it was playable in Las Vegas, Atlantic City and other major gambling centers. In 2012, in celebration of the third film, The Dark Knight Rises, Microgaming released an online port of that slot machine. This new game remains true to the original, but it uses the same engine as Microgaming’s Lord of the Rings: The Fellowship slot game, so there are some differences.

How to Play the Dark Knight Slot

The Dark Knight by Microgaming is a 5-reel video slot machine with a progressive jackpot and 243 ways to win. The Dark Knight Slot does not use conventional pay lines. Instead, there are 243 ways, which are all active for each spin. In order to offset this advantage to the player, all bets are multiplied by 30. Coin sizes range from $0.01 to $0.50. The minimum bet is $0.30, and the maximum bet is $300. The standard jackpot on this machine is four million coins, which is worth $2M at the big coin size. TDR is also linked to the same progressive network used by the popular Mega Moolah game. The Mega jackpot has paid out as much as $3.84 million.

The Dark Knight slots have a wild symbol, which can stand in for any non-feature symbol to form a winning combination. The wild also has some randomly activated components where an animated Batman or Joker will drop down onto the reels and turn individual symbols and even entire reels wild. 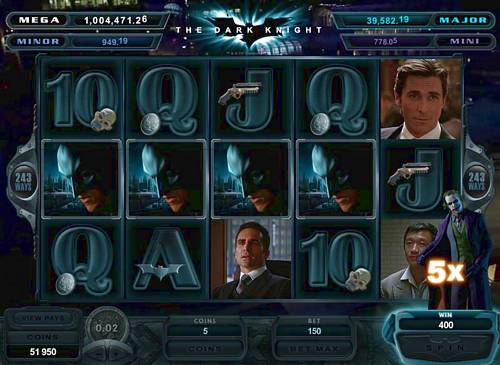 There is also a scatter symbol which is the Joker graffiti symbol. Three or more scatter symbols, appearing anywhere on the reels, awards 15 free spins. Each free spin has a x2 multiplier. Additionally, the scatter remains active and can award additional free games and other bonuses, including increasing the multiplier. 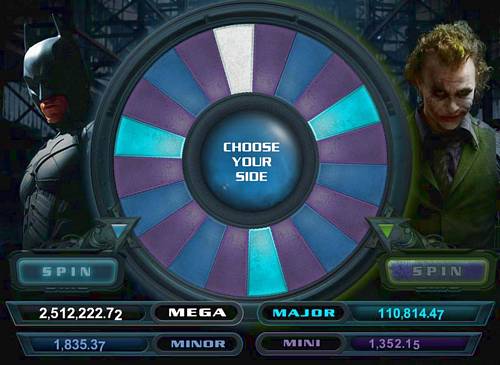 The Dark Knight slots employees the Cinematic Spins Feature which offers actual movie video clips to bring another level of excitement to the game.

Below are the paytables of the game: 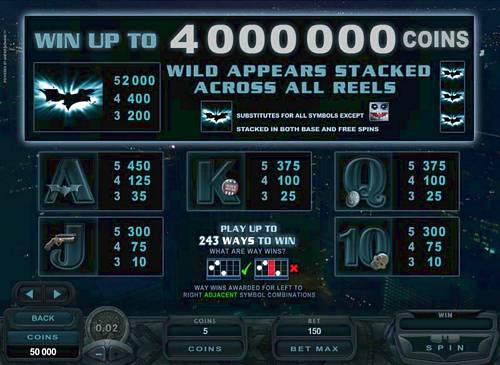 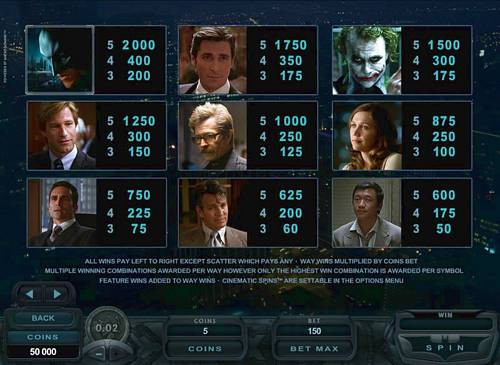 The Dark Knight Slot is one of the most impressive and polished online slot games ever. This is an innovative slot experience that doesn’t require a supercomputer to run smoothly. The game also offers a free arcade mode so that you can sample it before committing actual money. The game uses images, music and sound effects directly from the movie. It also does an amazing job of integrating that with the new content, which includes 3D animated characters and animations on the reels. The overall effect is tremendous immersion that might keep you playing a little longer than you planned to.

This is an amazing game that finds the elusive balance between a game that’s fun play yet lucrative enough to make it worth our while.