Deal or No Deal Jackpot

Deal or No Deal Jackpot is an online game that mimics the super popular TV game show of the same name. Deal or No Deal online is not a slot game at all, but a video game of chance.

Deal Or No Deal Jackpot is very similar to the popular TV show in many aspects. The only difference is that the online version allows you a couple of extra fun possibilities – placing side bets while you play the game and the possibility of playing for the progressive jackpot! The game offers two types of side bets, What’s In My Box and What’s My Next Offer. Sounds like fun, right?

>> Visit the Betfair Arcade to play Deal or No Deal Slots for real and receive £20 free! <<

Deal or No Deal Jackpot

In Deal Or No Deal Jackpot, there are 26 boxes that contain different prize amounts. The point of this game is to plainly assess the probability of what is in your lucky box, as compared to what is left in the other boxes. The player then uses their probability assessment to determine if taking the ‘Deal’ is a better alternative to choosing ‘No Deal’.

To begin, you first choose your stakes. 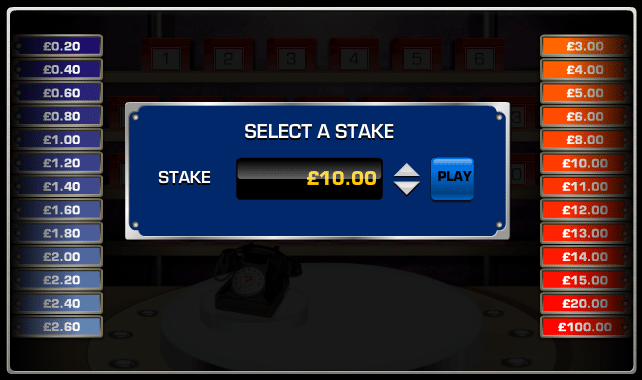 In the screenshot above, I chose to wager £10. As your choice in stakes goes up and down, you’ll see that the potential payouts do too. Then, you must select a lucky box that will remain closed until the end of the game. This is your prize box. Choose carefully though, as you are hoping to locate the box with the top prize amount!

In the real money version of the game, after you have chosen your box, you’ll be asked whether you’d like to place side bets on the amount you think the banker will offer next, or if you’d like to move on to picking boxes. This is one of the unique aspects of playing Deal or No Deal online at William Hill.

How to Play Deal or No Deal Online

Now, you will need to pick six boxes that you feel will contain the least amounts, or you can use the quick pick button to have the computer choose for you.

This marks the end of the first round.

And here is when the phone will ring and the banker will offer you a deal. This deal is based on the mean amounts of the remaining boxes, and you must choose whether to take the deal or not. If you reject the deal you may play on and chose six more boxes; however, if you choose the banker’s offer, then that amount becomes your winnings and the game is over. Be careful when taking deals, as you might be missing out on higher winnings! The longer you play, the more the banker is forced to increase their offers, so even if you expect that your chances at the highest payout boxes are gone, you can still increase your winnings potential by going through a few more rounds.

Jackpot Feature of Deal or No Deal

Here’s another special feature of Deal or No Deal at William Hill – the jackpot! If you swap the box, and the box contains a special jackpot token you will be taken to the jackpot round.

The Deal or No Deal Jackpot game is now an entirely new game. Again, 26 boxes will be on display, but 21 of the boxes will be empty, and only 5 will contain the coveted Jackpot Token. You have to try to find as many of the Jackpot Tokens as possible, with only 5 guesses. Yes, this is very difficult, but that’s why there’s a big jackpot! If are lucky enough to get all 5 Jackpot Tokens, then you win the massive Progressive Jackpot! Consolation prizes can still be won for finding less than 5 Jackpot Tokens. 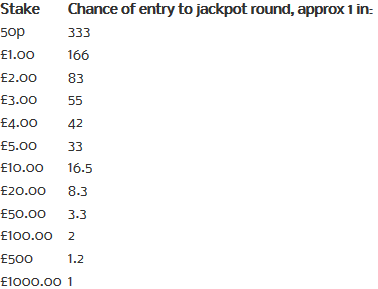 If you are interested in playing Deal or No Deal for real money, we recommend opening an account at William Hill Games.

Play Deal or No Deal Jackpot at William Hill Games by clicking here, and receive a £20 bonus!

Pretty fun but not many big payouts. I'd rather play a slot game I think.